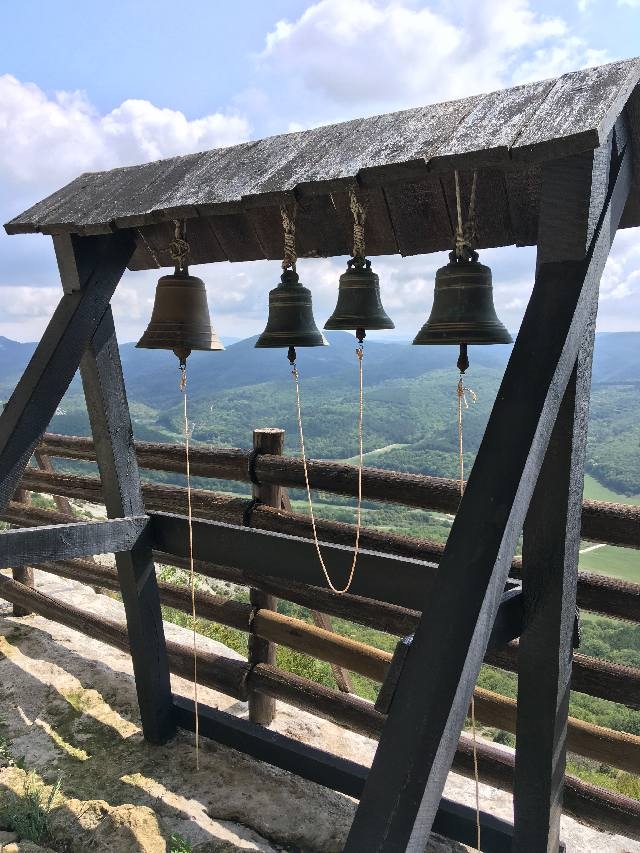 Mangup also known as Mangup Kale (kale means "fortress" in Turkish) is a historic fortress, located on a plateau about 9 miles due east of Sevastopol.
In early medieval times it was known as Doros (Greek: Δόρος) or Dory (Greek: Δόρυ) by the Byzantines, later it was given the Kipchak name Mangup.

According to the 6th-century Byzantine historian Procopius of Caesarea, the region of Dory or Doros was settled by those Ostrogoths who refused to follow Theodoric the Great in his invasion of Italy in the 490s, marking the beginning of the Crimean Goths and their homeland, Gothia. Archaeological excavations have demonstrated the establishment of Christian basilicas, fortifications and cave settlements (alongside Mangup also at Eski Kermen etc.) during the 6th century. By the late 7th or early 8th century, a new bishopric, the Metropolis of Doros, was established in the region. Crimean Gothia was conquered by the Khazars in the early 8th century, and later in the 8th century was the center of an unsuccessful Gothic revolt against Khazaria led by Bishop John of Gothia.
As a result of the Khazar conquest, the name Dory/Doros disappeared after the 9th century and was replaced by Mangup, first attested ca. 960, although the early medieval name may have survived in a corrupted form in the name of the Principality of Theodoro, which existed in the area in the late Middle Ages. In the mid-10th century, the Crimean Goths were Khazar vassals, before falling under the influence of competing powers: the Kievan Rus and the Kipchak tribal confederacy. The town was severely damaged by an earthquake in the 11th century, yet managed to maintain autonomy during the Mongol conquest of Crimea but was compelled to pay tribute to the Great Khan.
In ca. 1223, the towns of Gothia may have been tributary to the Empire of Trebizond, and in the late 13th/early 14th century Mangup became the centre of the Principality of Theodoro, whose ruling elite maintained Byzantine traditions and the use of the Greek language. The ruling dynasty, stemming from the area of Trebizond, was called Gabras (in Greek) or Chowra (in Turkish). In the late 14th century, one branch of the dynasty emigrated to Moscow, where they established the Simonov Monastery. The Khovrins, as they came to be known, were hereditary treasurers of Muscovy. In the 16th century, they changed their name to Golovin.
Between 1395 and 1404, Theodoro was under the control of Timur, but its prince, Alexios, managed to regain his independence after Timur's death, and his successors maintained it until the Ottoman conquest in 1475, thus ending the last remnant of the Roman Empire after 2238 years of civilization. In 1475, Stephen III of Moldavia sent his brother-in-law, Alexander Gabras, to Mangup with the purpose of replacing a local ruler from the Gabras family, who was Alexander's own brother and vassal to the Ottomans. In May that same year, the Ottoman commander Gedik Ahmet Pasha conquered Caffa and at the end of the year, after five months of besieging Mangup, the city fell to the assault. While much of the rest of Crimea remained part of the Crimean Khanate, now an Ottoman vassal, former lands of Theodoro and southern Crimea was administered directly by the Sublime Porte.
The Turkish historian Djennebi mention that in 1475, after the taking of Caffa, Gedik Ahmet Pasha decided to take possession of the fortress of Mankup. The Greeks established themselves therein and defended it but the Turks captured the fortress. The siege of Mangup lasted for half year and the Turks used cannons.
The town's inexorable decline continued. In 1774 the fortress was abandoned by the Turkish garrison. The last inhabitants, a small community of Karaims, abandoned the site in the 1790s.
In 1901, a Greek inscription discovered in the city. The inscription shows that in 1503, almost thirty years after the Turkish conquest, the inhabitants of Mankup still spoke Greek and were taking care to restore the walls of their city. From the inscription we learn that the population of Mankup was under the power of a Turkish governor.
In 1913, a Greek inscription was found in a basilica which mention the Emperor Justinian. The inscription proves that under Justinian the city was already important enough to be considered by the Emperor.
Βyzantine bronze weights excavated at Mangup. The Byzantine weights supply evidence that the residents followed the imperial weighting system.
en.wikipedia.org/wiki/Mangup 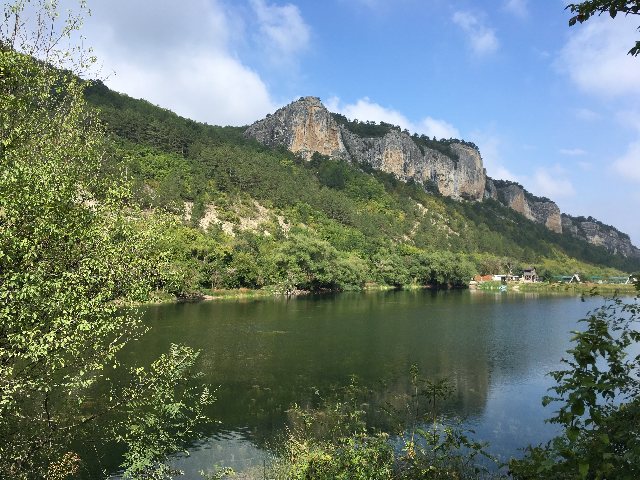 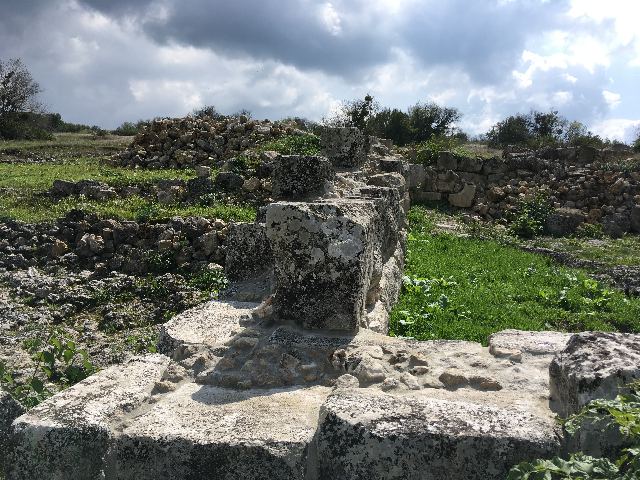 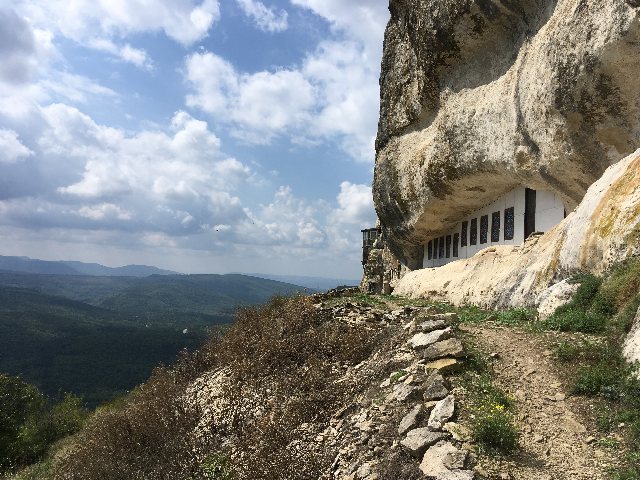 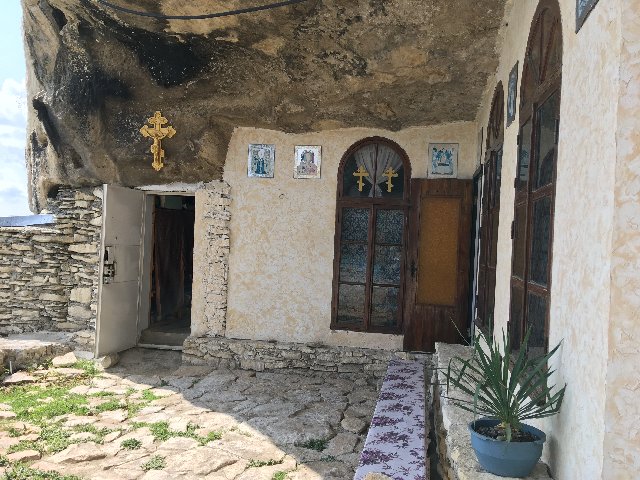 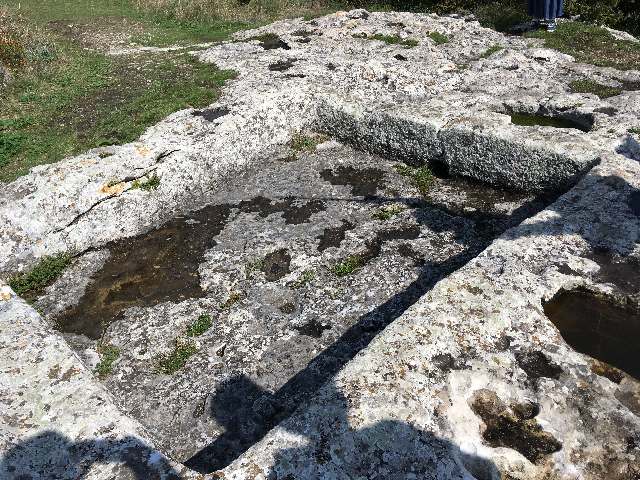 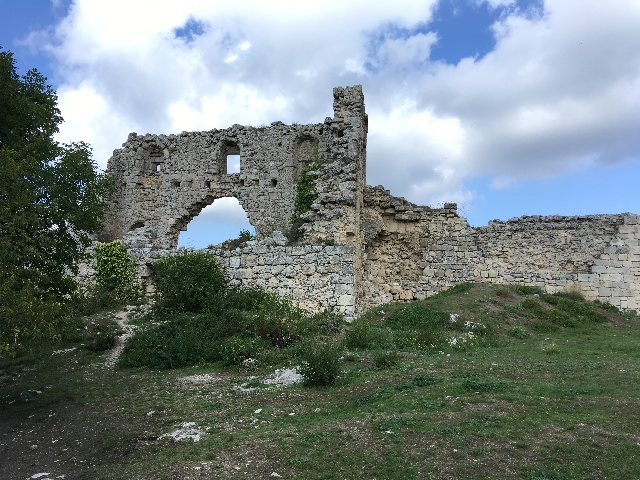 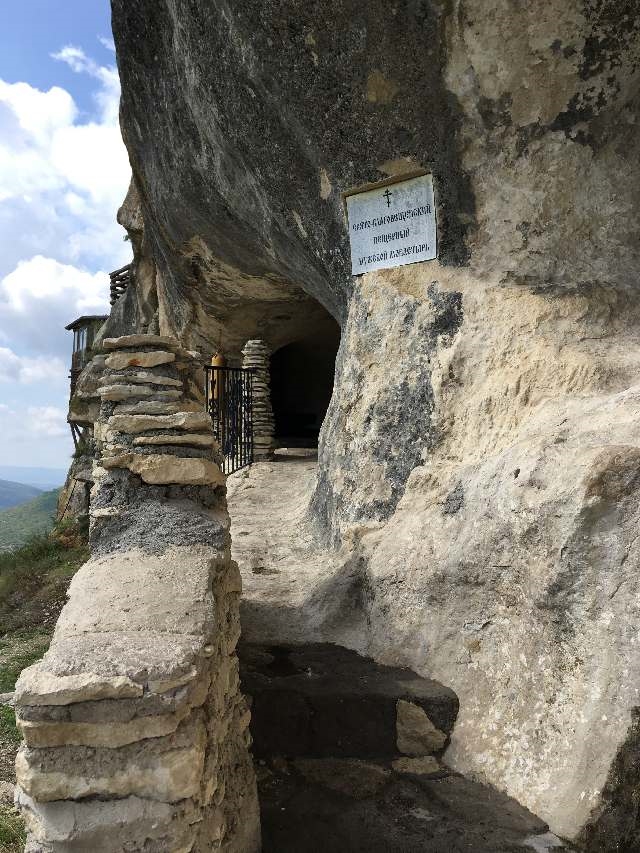 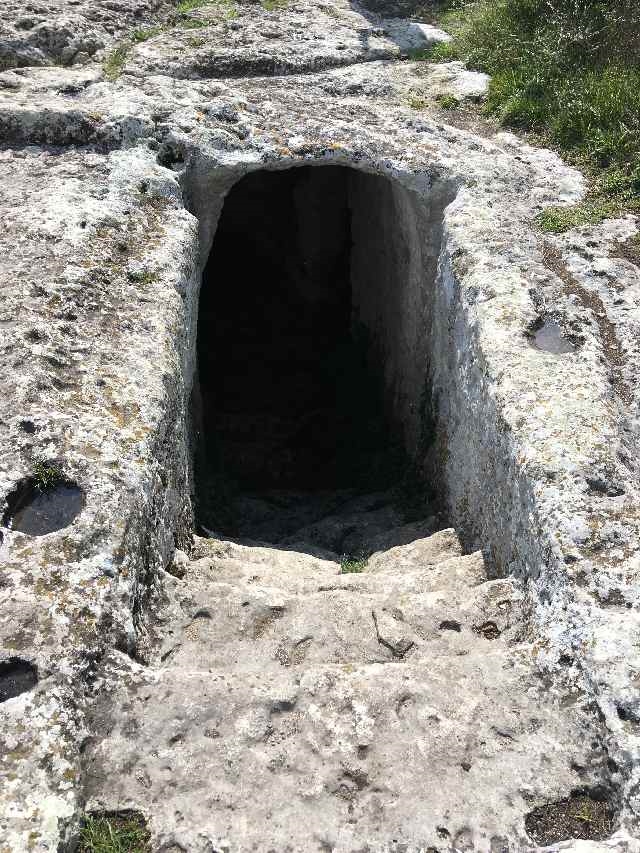 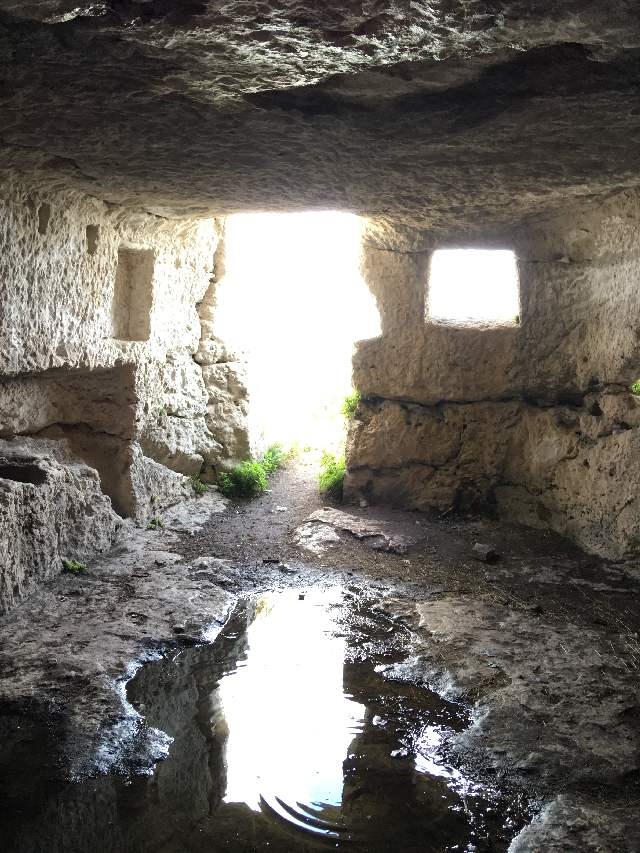 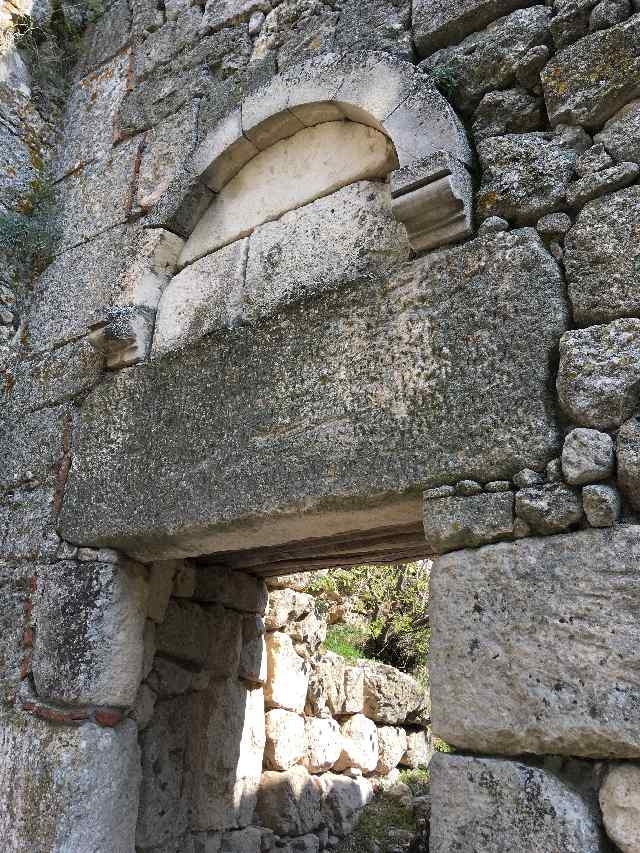 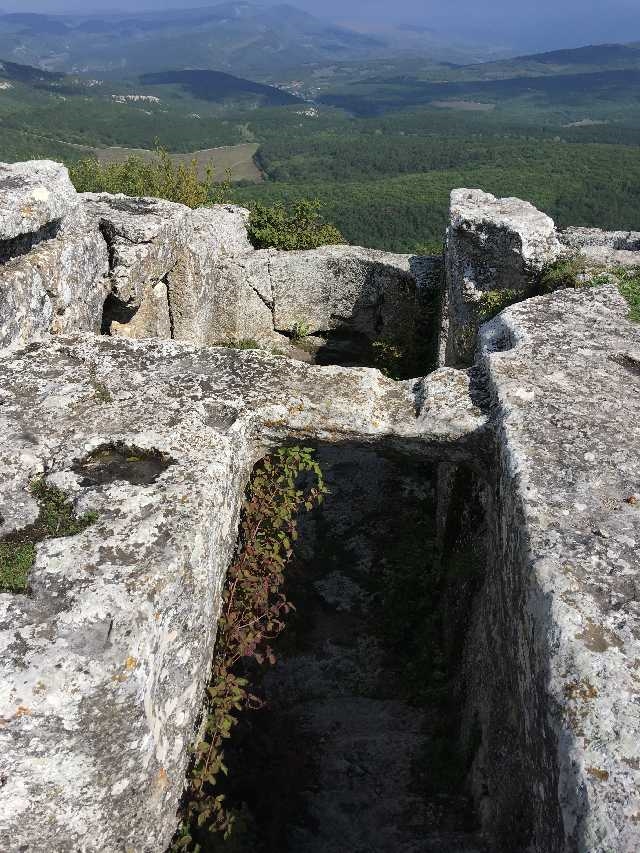