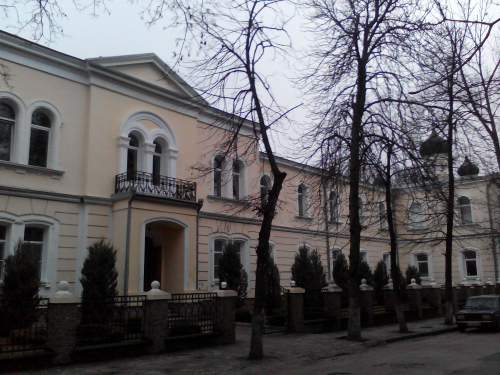 The Simferopol and Crimea (ex-Taurida) Diocese was founded in 1859. Having read the report of the Sacred Synod, to which there was enclosed the Crimea inhabitants’ petition about establishing in Taurida a new diocese of the Russian Orthodox Church, meant to unite the parishes, situated in Crimea and on the newly populated lands after the annexation of Crimea to Russia, on November 16/29, 1859 Emperor Alexander II put on these documents his tsar’s resolution: “Be it so enacted”.

For Russian lands Crimea became the cradle of the Orthodoxy — here such saints used to preach the Gospel as Apostle Andrew the First called, Equal-to-the-Apostles Brothers Cyril and Methodius, here in 988 Equal-to-the-Apostles Grand Prince Vladimir accepted holy baptism. From the beginning of IV c., after the creation in Crimea of the independent cathedras, the leading Orthodox clerics stay on the peninsula almost without pauses.

The Orthodoxy in Crimea used to have in its development a row of difficult stages and started to actively develop only after the foundation of the independent Taurida Diocese. Less than for ten years on the peninsula more than one hundred new parishes were established, the monasteries activated their activities, seminaries for men and woman were opened. In 1873 the Spiritual Seminary of Taurida was opened, which trained hundreds of the priests for 47 years of its existence.

Among the Crimean archpastors there were outstanding personalities, the true zealots of godliness:

Sainted Hierarch Lucas, the Archbishop of Simferopol and Crimea (Valentin Feliksovich Voino-Yasenetskiy, 1877–1961) — an outstanding archiereus and doctor, permanent member of the Holy Synod, surgeon professor, the author of the monograph “Sketches on the Contaminated Surgery”, the laureate of the Stalin's Award.

The Archbishop of Taurida and Simferopol Gurias (in the world Grigoriy Platonovich Karpov, 1818–1882) during 14 was in charge of the Taurida cathedra, he considerably consolidated the Orthodoxy positions in Crimea, used to do a lot for strengthening the working parishes and establishing the new ones. His Eminence Gurias did a lot for the diocese: he found means for building the Spiritual Seminary, Consistory, Religious School for men, requested the Synod about allocating the means for the reconstruction of the Alexander Nevski Cathedral, donate means on the monastery development, founded in Simferopol the Taurida Hierarchal House. In it The Spiritual Seminary of Taurida was opened, they started to publish the journal “The Taurida Diocese Bulletin”. The Sainted hierarch’s blessed death happened on March 17, 1882. His Precious Body was buried in the vault of the Alexander Nevski Cathedral. Before its very destruction in 1929 Archbishop Gurias’s relics and the relics of other four priests they managed to carry to the town cemetery to the All Saints’ Church. The eyewitnesses of this event said that 47 years later after the burial the Sainted Hierarch’s body was imperishable, even the vestments remained. The parishioners in the commemoration notes used to write: “of imperishably sleeping Archbishop Gurias”. During the second deposition of the Sainted Hierarch’s remains in the middle of XX c. their undecayedness was found out and the miracle happened: during carrying the coffin his Eminence’s hand was injured by accident and started to bleed.

There have been fixed a lot of cases of healing due to the prayers to the Sainted Hierarch.

On May 18, 2008 the Holy Synod of the Ukrainian Orthodox Church made a decision about the canonization of Archbishop Gurias (Karpov) as a locally venerated saint with defining March 17/30 as commemoration day, and on August 23, 2008 there was solemn apotheosis of the Sainted Hierarch Gurias in the Community of Saints.

Archbishop Demetrius (in the world Prince David Ilyich Abashidze, in the schema Antony, 1867–1942) — since 1912 was the Bishop of Taurida and Simferopol. From the beginning of the World War I he served as a priest of the Black Sea Squadron. In 1915 he was back to his bishop cathedra. He was the member of the Local Council in 1917–1918. He took part in the work of the Provisional Higher Church Government at the South of Russia. His last years he spent in Kiev-Pecherskaya Laura. He is buried near the entrance to the Near Caves. At present his canonization is being prepared.

The territory of the Simferopol and Crimea Diocese is washed in the west and south by the Black Sea, in the east — by the Sea of Azov.

On January 1, 2008 the Diocese united 532 parishes, 9 registered monasteries and 7 ones at the stage of registration; 70 temples; 462 prayer houses on the territory of the Autonomous Republic of Crimea.

At present in the Republic of Crimea there are three dioceses:

The Diocese of Dzhankoy and Razdolnoye

The Diocese of Kerch and Feodosia

The Cathedra Town is Simferopol. The Central Cathedrals are Sts Peter’s and Paul’s Cathedral and the St. Alexander Nevsky Cathedral.

The Diocese of Simferopol and the Crimea includes 9 deanaries:

Monastery in the name of the Great Martyr St. George in the Town of Sevastopol

Monastery in the name of St. Apostle Clement in the Settlement of Inkerman

Monastery in the name of Sts. Unmercenaries Cosmas and Damian in the Town of Alushta

Convent in the name of St. Paraskeva in the Village of Uchebnoye (Upper Topolyovka)

The Sketes of St. Anastasia

The St. Sawa the Sanctified Sketes

Cave Monastery of the Intercession of the Holy Virgin

In December 2006 according to the Resolution of the Holy Synod of the Ukrainian Orthodox Church (Journal № 52 of November 22, 2006) Simferopol Religious School was reorganized into the Spiritual Seminary of Taurida with four year full time education and accommodation for the students. Academic staff is priests of the Simferopol and Crimea Diocese, lecturers of the institutions of higher education of the Town of Simferopol. Learning is free of charge. Liturgical practice is at the Seminary Cathedral of Three Sainted Hierarchs in the Town of Simferopol.

The Spiritual Seminary of Taurida is equipped with the seminary library (about 5000 volumes of literature, including 150 unique pre-revolutionary books, which previously belonged to the Spiritual Seminary of Taurida, returned by the National University of Taurida, in the library of which they used to be from 1918 to 2006), general overhaul of the building have been made (there have been equipped the assembly hall, habitable rooms, study computer rooms, shower cubicles, kitchen, refectory, storage rooms, etc.).

In the Diocese there are the following departments:

The administration of the Simferopol and Crimea Diocese is given to the Most Eminent Metropolitan Lazarus (Shvets).